OVERVIEW:
Lincoln Energy Solutions is building a new strategically-placed distribution terminal in Natchez, Mississippi.  This new facility has a straight-line connection to the adjecant bio-diesel refinery. The site is located just inside the levy. The soil borings varied from 10 ft to 100 ft. but consisted mostly of typical marshy Mississippi Delta soils.  There was a concern that vibration installation would could effect nearby structures so ACIP piles were initially specified for this project. 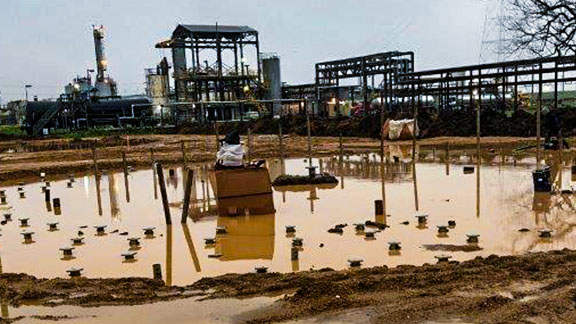 CHALLENGE:
Elevation of the site was 9 ft. below river elevation during the Delta rainy season. However, it was time restraints which were the biggest installation challenge. Once the notice-to-proceed was issued in February, the foundations were to be in place by the end of April. Additionally, the site was congested with multiple contractors working at the same time. 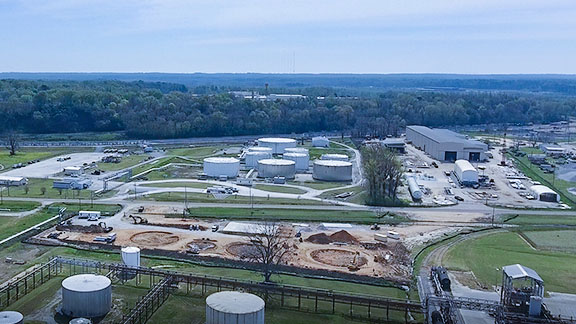 SOLUTION:
Helical piles were chosen as a cost-effective alternate because they could be installed quickly with no vibration, and required minimal installation equipment – a nice advantage on a crowded site. A hard sand layer was encountered at 60 – 65 ft in depth with no bedrock in this area. With this discovery, the helical lead configurations had to be changed in order to lock into this dense sand layer. Over 60 days, Engineered Solutions of Georgia installed 1,321 helical piles for 5 separate tank foundations. Each tank varied in foundation footprint and capacity. The largest being 80ft diameter with over 35 million pounds of capacity. Ultimately, the total number of piles provided 119,874,000 lbs of capacity for the tanks. Seven days after a footing was poured, the steel for the tank would be erected. Currently all tanks are built and operational. One of the post-installation tests is to fill the tank with water and measure settlement. The measurements are taken empty, half full, and full. Bear in mind that water is heavier than fuel. At full capacity, the largest amount of movement recorded was 0.003”. 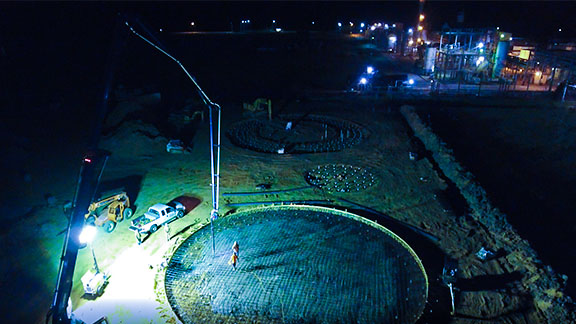