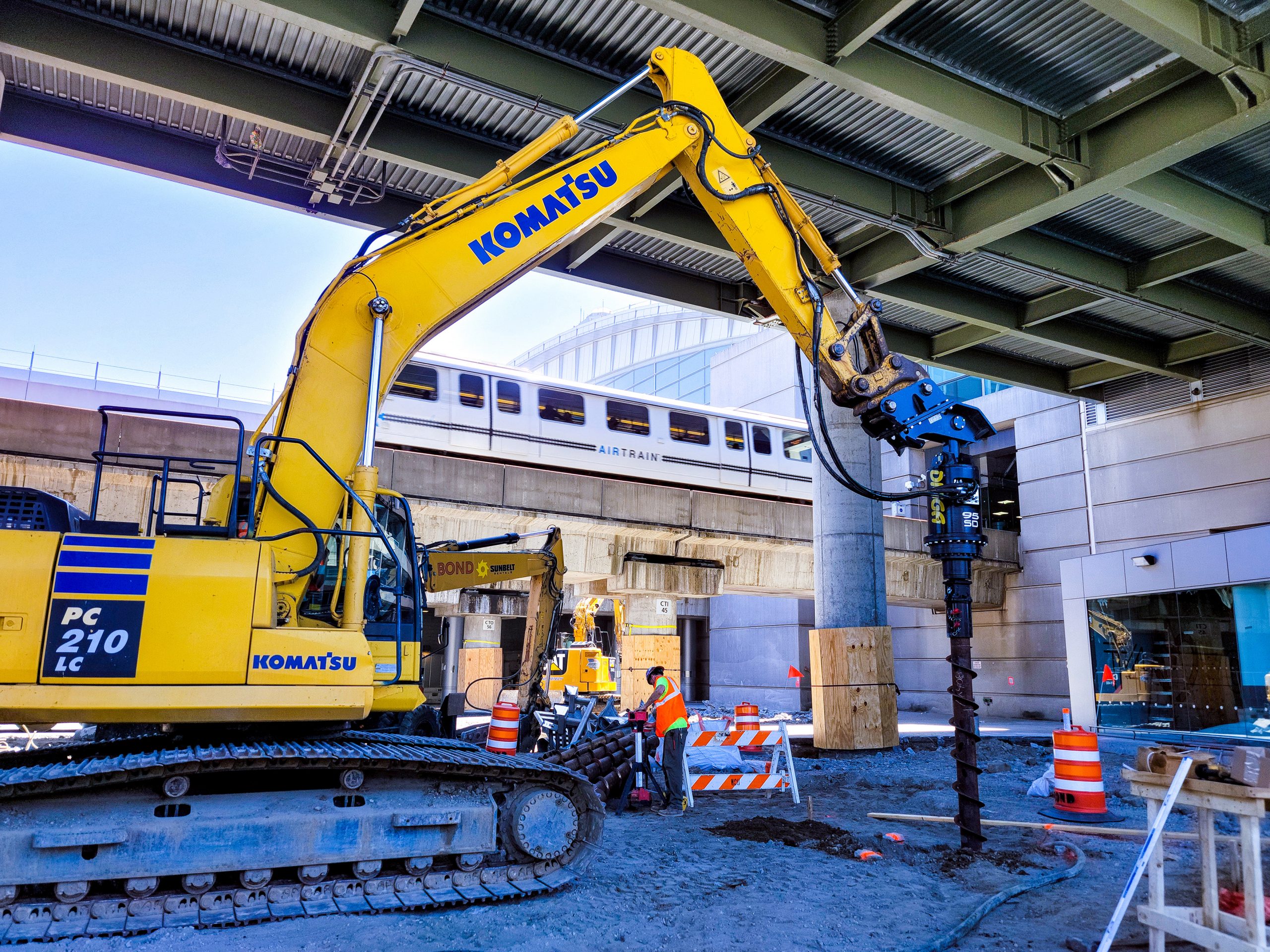 OVERVIEW:
Another successful STELCOR install at JFK Airport in New York City. This time around, we had the opportunity to provide a deep foundation solution for the expansion of the terminal 4 headhouse. In layman’s terms, the part of the airport where you get tickets, drop off baggage, stand in long lines, or wait for bags that may or may not arrive. The terminal 4 project results from the partnership between Delta airlines and PANYNJ, the Port Authority of New York and New Jersey. The $1.5 billion transformation will allow Delta airlines to consolidate its operations at JFK into one terminal while also updating and expanding its current facilities. The expansion will include additional self-serve kiosks and updates to the baggage claim and arrival areas. In addition to the changes in the headhouse, there will also be ten new gates and additional seating added to the terminal. The renovations and expansion are scheduled to be completed in 2023. 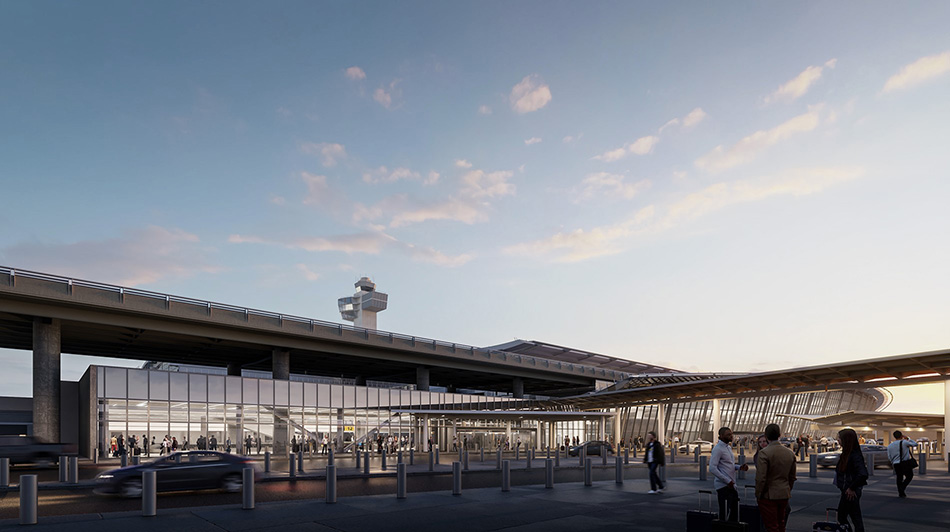 CHALLENGE:
The most significant challenge on this site was the headroom restrictions. The headhouse expansion extends under the existing elevated 4-lane departures roadway and the parallel AirTrain. The majority of the piles were to be installed under the roadway, and a few were required under the Airtrain. Both the overpass and AirTrain had to remain operational during the installation. With as little as 12 feet of overhead clearance in areas, traditional driven pile methods were deemed unsafe to install.

Equipment necessary needed to be compact as there was limited site space. The restricted site space also created concerns about managing spoils. Spoils would have to be contained and then trucked away from the site, which would be costly and time-consuming. Lastly, vibrations from installation also need to be considered due to the surrounding structures. 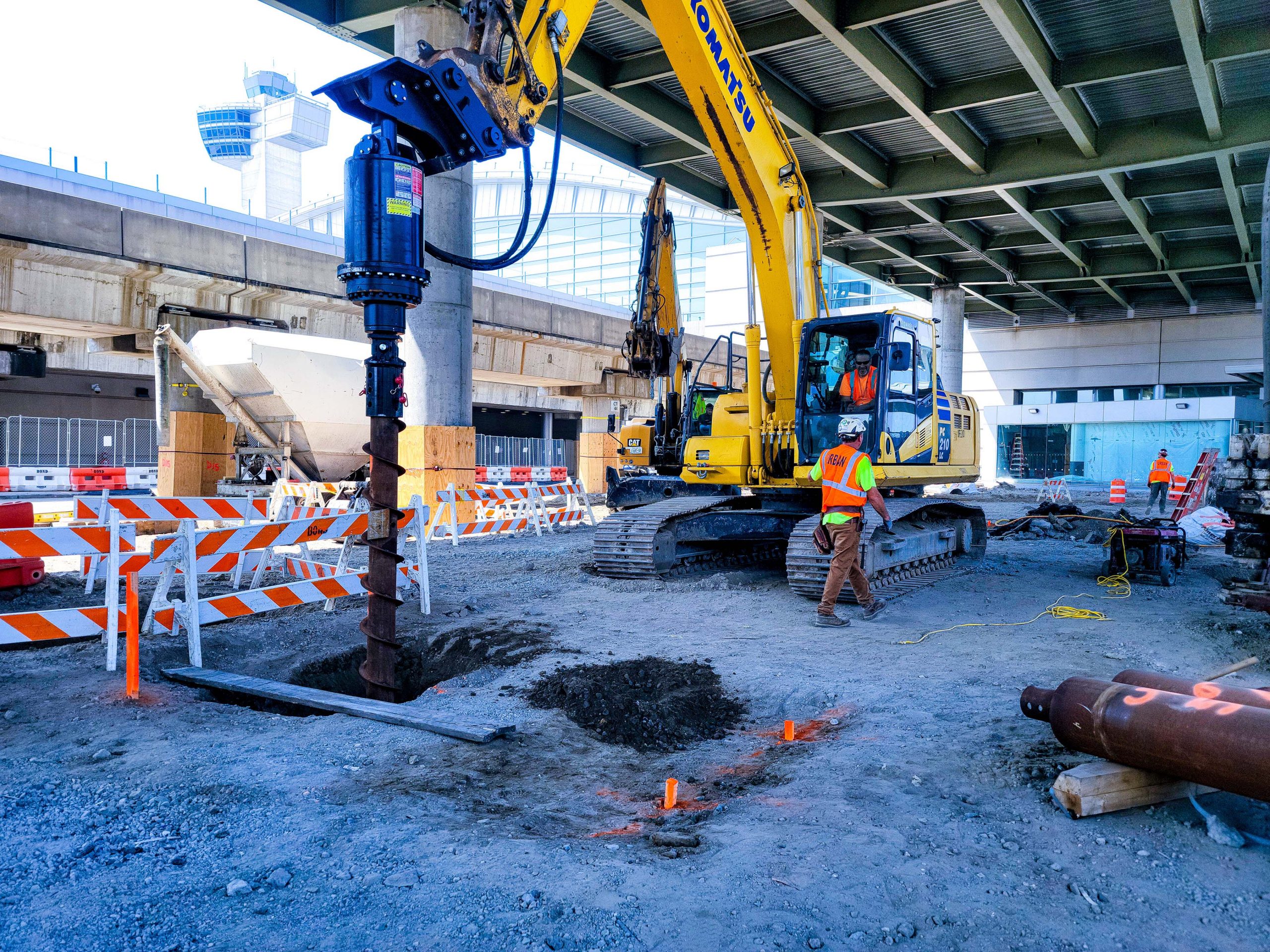 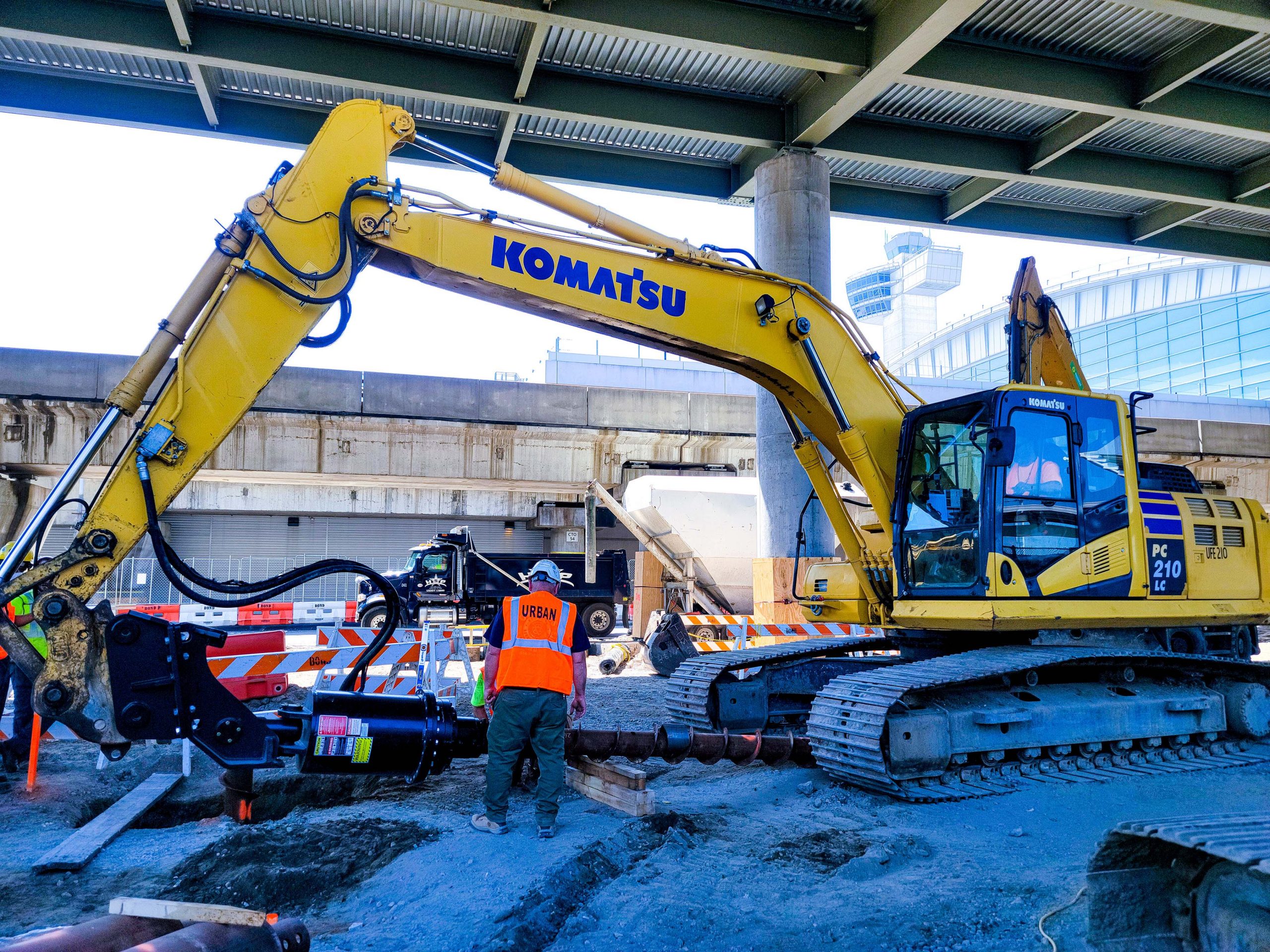 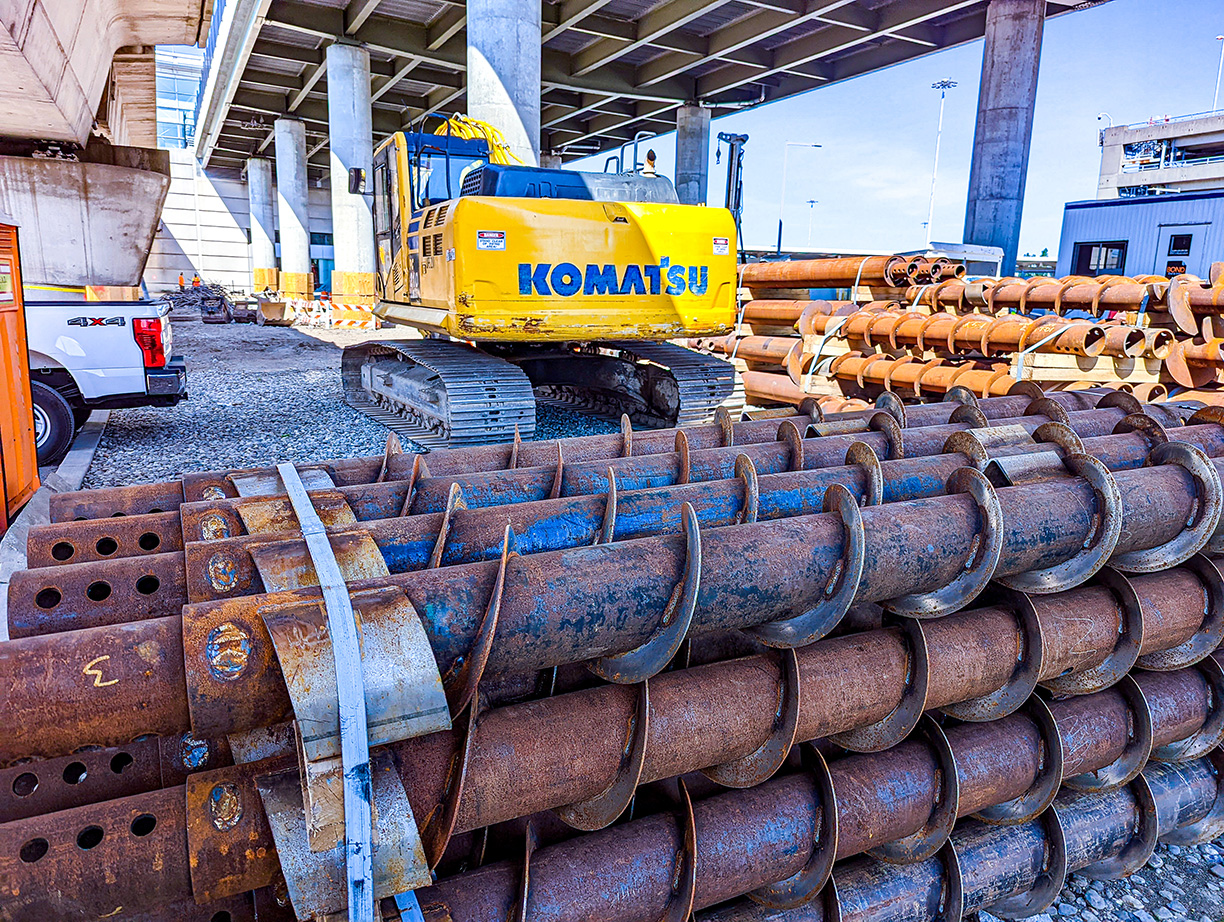 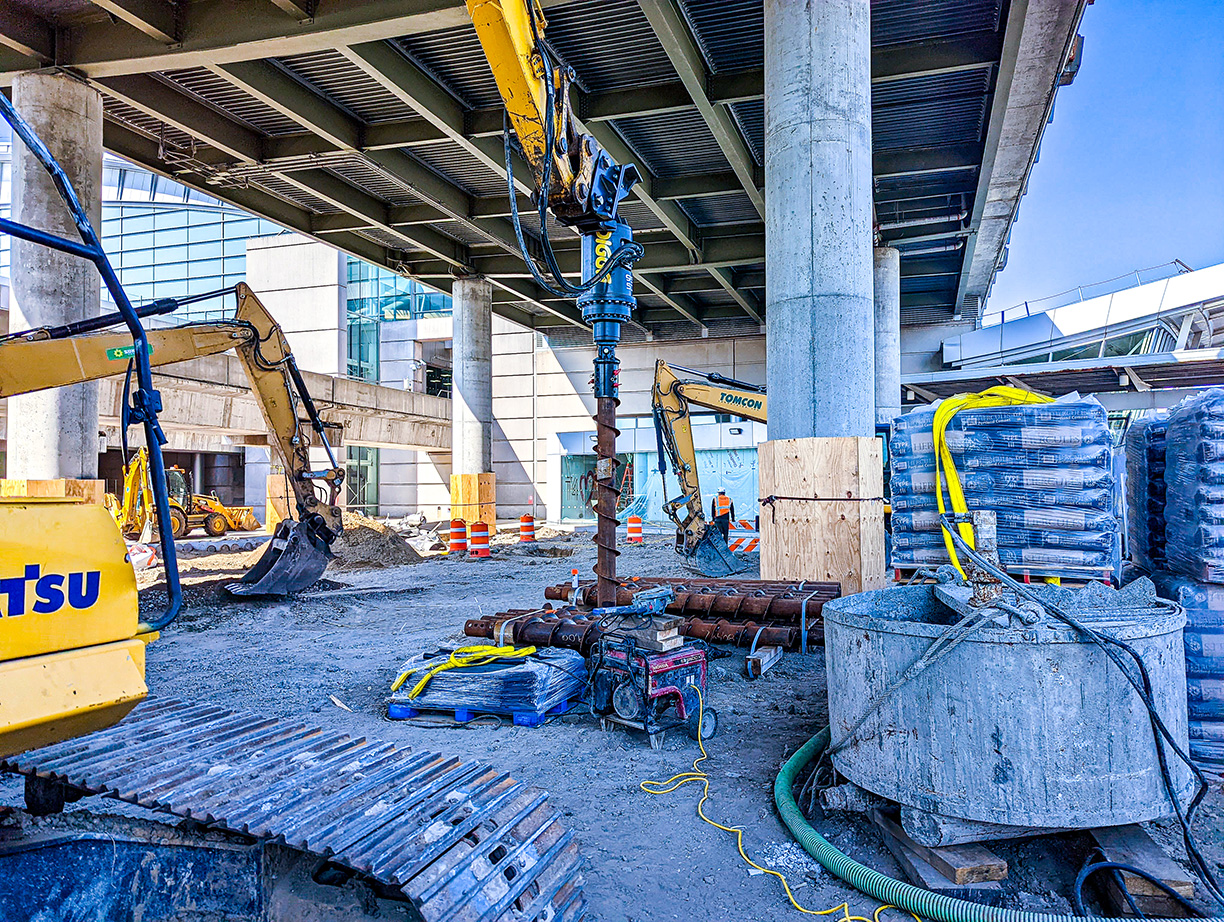 SOLUTION:
Drilled displacement micropiles were specified for this project by ARUP. DDMs were specified as they worked well within the confines of the project and could be installed with relatively minimal and readily available construction equipment. The ease and speed of installation, even with the overhead restrictions, was another advantage of using STELCOR for this project. A further advantage was the vibrationless installation which would not disrupt the surrounding properties or utilities. Using a displacement pile also saved time and money by eliminating spoils. With the above elements considered, STELCOR DDMs proved the ideal solution for supporting the headhouse expansion.

SOILS + EMBEDMENT DEPTH:
Subsurface explorations at this site encountered a layer of hydraulic fill, marsh deposits, and sands. The upper layer of hydraulic fill ranged from 3-14 feet deep and was underlain by native marsh deposits consisting of gray organic clay and peat. Glacially deposited medium-grained sands extended from the march deposit layer to where borings were terminated at 102′ and ranged from loose to medium dense.